I lost about a half kilograms of my weight after I cut nails from my feet ;) Once again after a long time I get a feeling that I am an engineer. I had posted about my problems with my Sony monitor earlier. Today I went to a few shops trying to get a couple of components for the monitor to change. I had to walk for about an hour and a half to go through those shops (this doesn't include the time to travel to that area from home). But patience paid and I finally got the capacitors and resistance for the monitor.

Opening the Sony monitor was a difficult process but if you do it step-by-step with some patience you do get to learn a lot. It took us around an hour and a half to dismantle it completely. See the D-board for it above. Changed the capacitor which looked faulty and built the monitor again. Connected power supply to it and carefully switched it ON. Walla! High-pitched noise is almost gone. Whatever is left was only heard for the first minute and has not come back again.

The monitor is working perfectly now although I think I might have to change a couple of more components. But I can't complain, the engineer did such a nice job!

Today some telemarketer company called up to sell me a cellular phone. Below is how the conversation went:

She was offering me a free cell phone and I said I couldn't afford one! Ha Haa. The surprising thing was that she believed me!

Allright, I confess that I missed Portugal's display on 20th July. I was feeling a bit lazy and there was no one to accompany me.

Last saturday, it was Canada. Right before 22:00hrs the countdown started, 5...4...3...2...1... and nothing happened! They took about a minute to start their thing. They had a really nice start, with an impressive commentary. I got only some parts fo the commentary as it was in French, but I got the jist. Canada had some really big, noisy and beautiful fireworks in the beginning but later it was almost routine. They did start with simple stuff for every song, but impressed just before they finished the song. Although end-of-song displays were good, they should have been much better.

The finalé wasn't that good either. They kind of elongated it a lot with very less color and sparkles. I wonder if I got any good shots that night! All in all, I wasn't impressed by their display. They had actually raised my hopes with the fantastic start but they didn't live up to my expectations.

For me its still either the Czech Republic or Argentina for the top (assuming Portugal didn't do as well). Wednesday, its the U.S.ofA. Lets see how they perform this time.

PS: Yes, uploading pics is pending for Spain, Czech Republic, and now Canada. Don't worry they will be here soon :)

As detailed in the earlier post, I'm experiencing problems with my monitor. I think it is either a transformer winding or something similar which starts to resonate. I'll probably try to troubleshoot the monitor and hence the webserver on my machine will not be available for some time today.

PS:Even if I decide to not run the monitor, I will be using the other monitor and the machine should be up within an hour or so. If anything worse happens, I will have it up headless!

Just yesterday I connected two monitors to my Nvidia FX 5700LE video card. After hacking my xorg.conf for straight 3hrs I was finally able to make both of them work on my Debian box. I was very satisfied to get two X screens in front of me with independent resolutions and more workspace.

Unfortunately, my Sony CPD E200 monitor has started acting up in a very annoying way. Randomly, some coil starts resonating at a high pitch which is very annoying when you are sitting in front of the monitor. Also, due to the resonating coil the image displayed on the screen has hundreds of horizontal lines :(

I don't want to loose my Sony monitor as its the only one which gives me a 1600x1400 resolution and I can't afford to buy a new one!! Just keeping my fingers crossed.

It has been just announced that there will be no Firefox 1.1 release. The next final release will be of Firefox 1.5 with beta releases in-between. Firefox 1.5 is scheduled to be released in September 2005. So much for release numbers!

Due to reasons explained in my previous post and udev playing weird tricks, I wasn't able to download the pictures of Fireworks display by Spain and the Czech Republic to my machine. Hopefully, udev will behave and I will upload the pictures soon.

This weekend it was last year's champs, the Czech Republic. They had a brilliant display. Good choreography, good colors, good synchronization, and heart thumping sounds. The quality of their display could be judged from the cheer of the crowd too. If the Czech Republic is not on the top, I think it was atleast as good as Argentina. The are neck-and-neck. Just a few more countries to go, and we will have the winner.

This is just to let everyone who tried reaching the few webpages on my website that the webserver is back online. The cause was an apt-get command which uninstalled several thing from my Debian box. The Unstable is in a pretty bad shape these days due to the x.org transition, and the ABI change. It may stay like this with the upgrade of KDE3.4 in next few weeks.

The result of the accidental apt-get was that I had to reinstall the system due to multiple problems which were created. The install took longer than expected due other commitments during that time. Presently, the webserver is up and running as it was earlier. Even googlebot and msnbot have visited the website atleast once after the upgrade.

It is possible that there might be some downtimes in the coming couple of weeks as there are still problems installing KDE, sound doesn't work, and can't get nvidia drivers to work with xorg.

PS: Anyway, the upgrade gave me a clean install of x.org, which looks cool and a little faster than XFree86 even if its running with nvu drivers.

As promised, here are the pics from last weekend. The fireworks were displayed by Argentina, and the other two are from the Jazz Festival while we were walking back from the fireworks. Went to see Argentina perform at the International Fireworks Festival. They did well. Although I some more colors at the end would have been better. Yes, I took pics....maybe I will post them here tomorrow. But don't expect high-res versions ;)

On the way back, we walked through the gay village, which was in a gay mood as always. And later, it was a slow and careful walk through the Jazz festival. Will post a pic of that too tomorrow night.

At what age do you start running? 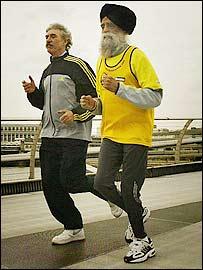 I have heard that doctors say that before you start any serious exercise schedule and if you are over 30, you should get a complete medical checkup. Well, thats allright. But I want to know what tests or precautions they recommend for someone who plans to take up a career in running at the age of 81!

Surprised! Yes, this is what Fauja Singh did. His profile:

For more details click here and here. I feel so embarassed as I haven't ran in a while or even played soccer :(